hhhmmmmmm well....... in my rush to get some shiny paint on the frame, i managed to miss the fact that the bearing tracks were shot to pieces!

Naturally it would have been desirable to have removed the tracks BEFORE I paint! But too late for that!

Anyway - being careful I managed to get the top and bottom bearing cups out without really damaging the paint! New fork overhaul set ( Ebay bargain ) arrived and are now fitted. The forks I orginally planned to use are really past their best upon further inspection, so I'm currently try to find a decent set! But it's not proving easy!

Chris Taylor (fellow blogger) has come to the rescue with a loan set until I get a set sorted. Its been great to find fellow racers so willing to help out with donating or lending bits........ theres a great spirit amongst racers!

Next major bit to source is legshields and a headset.!!

So Saturday - didn't have too much on, paint on the frame was nice and dry..... so hey - lets get the engine in! Now....... that seemed a simple task....... but in the two years since the frame I'm using was stripped apart, one of the engine bolt cones has gone AWOL. After an hour of pulling stuff out from under the bench, emptying boxes, looking fruitlessly in pull out trays............... I give up!

One of my nearest dealers is Kev Braithwaite ( ex- racer ) at TWE Scooters in Mansfield.......... so off we go to his emporium (!) Every time I go there he still tries to sell me it! I got a few bits and bobs, rubbers, cables and a few little things.

Bizarrely whilst up in his storage are I spy on the shelf a couple of things that take me right back about 15 years! Sitting there on the shelf is a Brand New Dunlop TT60 Slick - still with the labels on it! Next to it are 3 more - but these are used / scrubbed. They are for sale - offers invited! then..... sitting below them is a front and rear Brisgestone Battlax- I remember using these as wets back in the day! They had a different front tyre tread pattern with a centre groove, which was not on the rear version, which was also a slightly different profile!

I resisted the temptation to stuff notes in Kev's hand - but would have been very retro ( its all the rage you know!) So, back home, and slip the cones in the frame Miles gives me a hand with engine and in it goes! At least I'm now seeing some decent progress so I'm pretty pleased with this weekends progress. 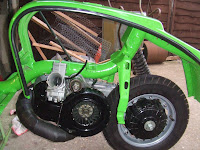 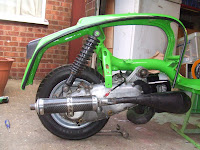 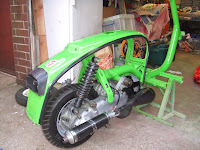 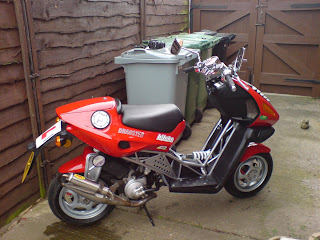 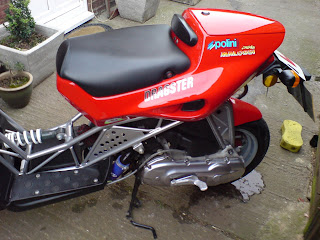 Well...... at last a few things have started to come together!

As you may remember from previous posts I've spent a lot of time messing around with a twist and go for my son...... well..... an immaculate Italjet Dragster appeared at a reasonable price and ( fingers crossed ) is nice and reliable!

The old Sym Jet was pretty damn cheap, but its had a hard life and I reckon after talking to a few people they seem to have some pretty fragile electrics!

It seemed to be one electrical problem after another, which i reckon we've now cured , as its been reliable for a while now, so the Dragster has arrived, and the Sym jet is on Ebay! Hurray...... clear the decks and get on with the Race Scooter!!!!!!!!!

So.... the progress since last time..... well the engine was dropped off to Martin Cook at Chiselspeed. He gave it a once over, added a nice new Mikuni TMX35 carb, and set it up on the dyno. The ignition on it was a bit of a puzzler, and it turns out that its a modified Piaggio one. The HT coil supplied withthe engine was actually nothing to do with it! So Martin fitted a new Piaggio coil and all was well.

The engine dyno'd at a little less than expected, which we reckon is down to the exhaust system holding it back a little. Its good to go with for now though....... but a some point a new exhaust will help it out!

So with the motor collected and no auto's needing attention, then I decided to muck out my garage and make a bit of space so i could 'crack on'!

I spent this weekend rubbing down and preparing the GP frame for painting...... i'd forgotten just how tedious Lambretta frames are to prepare for painting! By late Saturday afternoon it was ready for a coat of primer, so fire up the compressor and away we go!

The primer filled and covered well, with a minimum of further rubbing down needed. So Sunday morning, and there I was laying on the Kawasaki Ninja green paint! Its nice and bright! I managed to get a couple of runs but they are underneath and well hidden so thats no problem!