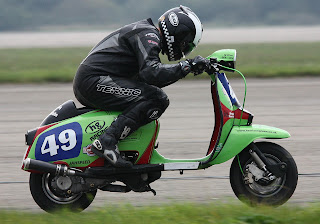 Ocober 2nd saw the inaugural Scooter Shootout event at Elvington Airfield.  The event was to be for scooters only and with a wide variety of classes .... there was something for everyone!
I hadn't actually made up my mind to go until the day before, so the scooter was untouched from Cadwell Park the week before!  Arriving at Elvington about 9.30 there was a good number of people already there, and for me a nice mixture of old and new faces.!
Scrutineering done and checked.... it was nice to have Miles around for a change and he helped out pushing the scooter around to scrutineering ( Wayne Rooney!) 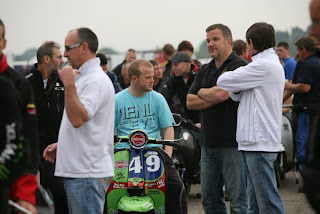 It seemed that the organiser were a little overwhelmed at the numbers to sign on and it took me almost an hour to get to the front of the queue!  Once done however there was noise test (!!!) which recorded me at a whisper quiet 99db (!) I doubt the noise tester will go to heaven!
So......   as I lined up for my first straight line sprint since around 1989 it all seemed a bit strange and I really didnt know how it would go!
There were some familiar faces among the spectators as I shuffled forward to the starting position.  The race organisers had told us that we were not running the 'pro' lights system, which meant that the lights would be;
White - to show we were in the correct position.
Yellow - Prepare to start
Green - Go - in our own time. 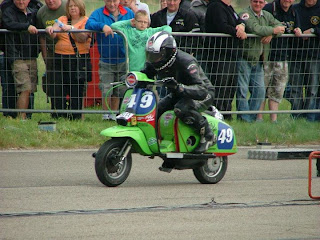 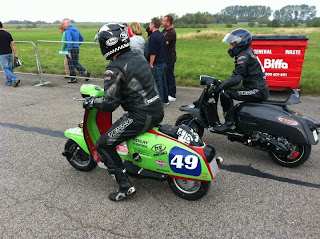 This meant that you didn't actually have to try and anticipate the lights.... once green then the timing wouldn't start until we actually broke the beam.  I don't think this info had made it as far as the spectators as there were several comments about various people ( me included) being slow off the mark....  but we were racing the clock not the other guy!
The first couple of runs went ok, but under full power i missed a gear - the selecter is a little worn really which didnt help!  The first run felt flippin fast as I passed the finishing boards.... the runway was a bit bumpy in places and was different at speed compared to the smooth circuits we normally race on and somehow felt faster than road racing.
Once the runs were done, we got a card which gave us the quarter mile time, or just past the 1/4 mile markers was second set of markers which was the 500metre terminal speed trap.    I was 83 mph on this on the 2nd run.  The 3rd run was after a break to let the engine cool.......  this one seemed to hook up well and I was chuffed to see 86.2 mph on the timing card!
A couple more BSSO group 4 bikes had now turned up so what was a bit of fun seemed more serious now! As the scooter had been untouched since Cadwell I had left the gearing as it was.  Sprinting seems to be a black art as far as gearing goes and it feels like if you talk to 3 people you'll get 4 answers!   So at lunchtime i figured I might try dropping the gearing by a tooth on the front.... thinking acceleration would be quicker........
Trusty Martin Clarke was around to dive in and help with the gearing switch so it was compelted quickly during the lunch break.
In the afternoon there were much longer queues as everyone was now signed on so the turnaround was a bit slower!
The runs completed on the lower gearing were not any faster though!  All I was doing was revving out a bit too early and whilst I could match the top speed and did slightly drop the 1/4 mile times I couldn't go any faster.
Upon reflection I  reckon I should have actually highered the gearing slightly with dropping a tooth on the clutch bell and concentrated on start technique!  I could possibly have downjetted a little too......   I tend to run on the 'safe' side, so that could have made a difference.   No matter...... despite this I did actually get the fastest speed of the BSSO Group 4 bikes , the fastest speed of any 200cc Lambretta, and was quicker than all of the fast road scooters!  This was the bit that really surprised me as there were some very well prepped RB and TS engined scooters there including 230's and 250's  so I was actually quite surprised that not one of them was close to the top speed of the Grp 4.

Coming away from the Scooter Shootout I have to say it was a top day and I thoroughly enjoyed this different form of scooter sport.  The day had been a brilliant success for the organisers with over 100 people taking their scooters down the strip and over 600 people in attendance on the day! This is certainly enough to show the demand for the event and as a first effort it was great!  in 2012 a weekend is on the cards and I fully expect Scooter Sprinting to be a big thing next year!   There was a huge buzz about the day on the forums afterwards and I have been in touch with the organisers to co-ordinate dates for 2012 so theres no clash with any BSSO race dates.
I was certainly buzzing myself and I must admit the event has made me rethink things.   Chalky has some ideas for a new engine and I have bought a engine casing to start work on a sprint specific engine for 2012.  I fully intend to do much of of this straight line stuff in 2012! 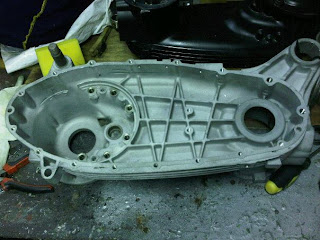 The basis of a new 2012 Sprint Engine!
Posted by Paul Green