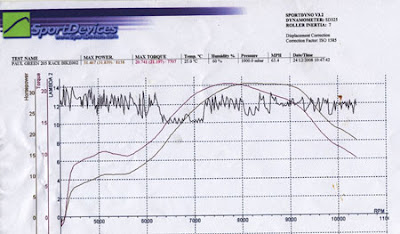 Since the racing at Joigny in France, the engine from the race bike has been with Chalky White at Replay Scooters in Rothwell.

Chalky originally built the engine for himself to race, but never really got around to it! Chalky spoke to me at Cadwell, and was delighted that his engine had finally made it onto the track!

You may remember that at the final BSSO race at Cadwell I had what proved to be a 'phantom' twisted crank... i.e. it wasn't actually twisted despite giving the symptoms of a twisted crank! I had managed to run at Cadwell and at Joigny by using Ralph Remnant's (SRP Tuning) spare Motoplat ignition set up.

So after France, Chalky offered very kindly to check over the motor, and try to get to the bottom of the ignition problem. We also agreed that he would do some more work on the barrel to provide some more power for 2009. When he had originally tuned the engine, he wanted something with a reasonable spread of power and a rideable delivery. The engine had proved to be great for my return to the race track after 13 years away...... enough power to scare me, but not enough to spit me off...... but above all (except for the ignition problem) reliable!

I had been giving 2009 a lot of thought after Joigny. I was enjoying very much the thrill and adrenalin fix of being on a race track, but realisitically at 45 and such a long time away, I ain't going to be challenging Stuart Day and Charlie Edmonds any time soon!

So I decided that some economical power improvements to the motor, and as much track time as possible using test days at Mallory and the like, would be the best way to go!

Crankshaft - New crankshaft has been built and fitted. A good quality GP crank was split by Chalky and rebuilt with a longer Japanese con rod. This new crank will be able to handle the extra power Chalky was working on!

Barrel - The existing Rapido barrel was reworked. Transfers were enlarged through their whole length. Exhaust port considerably altered and raised to give 192 degrees of exhaust. The inlet was enlarged and smoothed to improve the matching of the barrel to the inlet manifold.

Ignition - The old ignition stator plate has been totally replaced with a new one. A BGM stator plate was used to provide the sparks! The previous flywheel (modified Vespa PK with plastic fan) was cleaned up and skimmed to tidy up the internal damage.

Exhaust - A few cracks were found in the exhaust system, so these have been welded and fixed. New exhaust rubber mounts.

So.... after Chalky had done all the above changes, I took my frame down on Christmas Eve and we re-fitted the engine, and put the bike on the dyno for a couple of 3rd gear power runs to see the improvement. At the start of 2008 the engine had been setup with a Mikuni 35mm carb on the Chiselspeed dyno and had produced 23.96 HP so both of us were keen to see the improvements. In my mind I was hoping for 27-28 HP.

The engine started easily when we bumped it up outside (to please Chalky's neighbours!) then it was up the ramp and through the workshop keeping the engine running whilst we strapped down on the dyno. We had checked the Agusto advance / retard system with a strobe, so we were good to go!

Chalky said that as he accelerated the engine felt really smooth - like a very powerful road bike...... great spread of power...... should be superb out of bends.

The engine is producing over 30HP across a pretty broad rev range. I have always preferred engines with this type of power delivery so I am well pleased with the results. Torque is pretty good as well with maximum of 20.7 Nm at 7700 revs (peak power was at 8100 revs).

Theres a little work to do on jetting, with something wild occuring between 6 and 7,000 revs, but it's safe so we will play around with jetting at a later date.

Unfortunately due to external factors I was not able to go play at Mallory Park Plum Pudding on Boxing Day, but hopefully in February / March I will be able to start testing at Mallory practice days..... I reckon the first race meeting will be a great feeling !

A really big Thanks to Chalky White at Replay for all his help and great work on the engine. Very much appreciated!