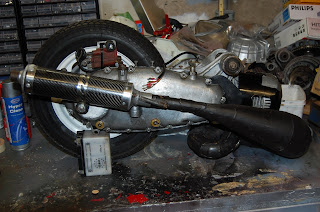 Well...... Christmas came and went with little progress on the race bike sadly!.

I spent most of Christmas in and out of hospital, so there was no opportunity to really get on as i'd intended!

The arrival of chickens at home as well ( yes yes - its becoming just like the Good Life) has meant a few jobs to do building chicken runs which took up valuable scooter tinkering time, still,

Feeling a bit better.... I managed to have a good stab at clearing the decks in the garage this week, so i'm now ready to make a start on spraying the frame in readiness. The frame is not too bad really, I think the layers of dirt and grime had protected it pretty well!.

First priority then is to get it painted, so when the engines in it at least i'll have a rolling chassis to move around, seeing as the garage is pretty cramped with far too many machines I tend to do a lot of juggling around to make space!

The engine is going off to Martin Cook at Chiselspeed to check over and tweak (!) ( http://www.chiselspeed.co.uk ). It was apparently dyno'd at 26HP, but no longer has the carb on it that it was originally built with, and of course I don't know 100% how accurate that figure is, so a new carb will be needed, and then Martin will set up and dyno ready to go.

Coming up soon is the AGM for the BSSO, where there are a number of motions and proposals which will possibly shake up the rules for the future in Group 4 , so it will be very interesting to see how the riders vote!

My own proposal is to restrict back current Group 4 to become 'Classic4' and revert back to cast iron barrels and other restrictions, whilst at the same time creating a new 'super4' class where the rules are actually relaxed slightly so there can actually be slightly more scope for engine tuners, alongwith the fitting of various gadgets, sensors and gismo's, all within a standard shaped, full bodied scooter. I reckon Charlie Edmonds, Paul Baker and the like will soon have engines pushing or exceeding the 40HP barrier, and would be awesome to see full bodied scooters flying around the tracks, mixing it up with the bigger bikes. Non scootering spectators would love it, and would be a great spectacle. I just hope the riders share the vision, and vote for it!

You only need to raed the post relating to Charlie's escapades with the bikes at Mallory on boxing day where he came 7th against 250 and 500cc bikes. That kind of thing really helps us I feel get good publicity and feedback on scooter racing.

I picked up a decent set of Belstaff leathers from trusty Ebay last week, so thats one more thing off the list!

Anyways........ happy new year to everyone involved or interested in scooter racing, next blog post should hopefully be shortly after the AGM with all the news from it for you!
Posted by Paul Green No comments: