The weeks prior to the Mallory test had been really hectic one way or another.  Unfortunately I had totally run out of time to do the intended new paint job.... but my good mate Dave Crampton's Gp6 was looking nice once it was all bolted together!

The big changes to the scooter for 2010 were all based around the new 2010 exhaust.  John Howe at Jahspeed has done a brilliant job with this new prototype design for Group 4!  It looks and sounds amazing.  Initial dyno test shows 2 HP increase and more torque...... although achieved slightly at the expense of a wide power band as its a bit peakier now! 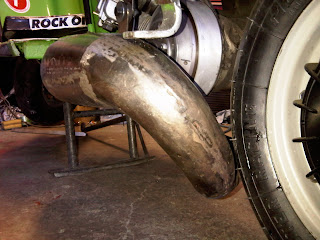 The new exhaust is built around the engine and runs real close to the back tyre and will nicely warm the rear tyre ready for left handers!!  The engine now has direct air scoop for cooling (the aluminium cooling scoop was erm,... interesting to make!)  In order to allow for the scoop cooling I have a new cylinder head - large!!!!!!

Chalky White at Replay has remachined the combustion chamber to a new 2010 shape, and also machined down the mag housing to a bare minimum..... no cooling fan now!

So...............  following the initial run on a dyno it was time to get on track.  Finishing Dave's Gp 6 had been very much a last minute affair with lots of midnight oil being burnt.....  which meant we had to take it to Mallory having not even started it (more in a future update on the Group 6 bike)!  So once we had got there.... I proceeded to get ready to go out.......  whilst Dave proceeded to try to start his for the first time! 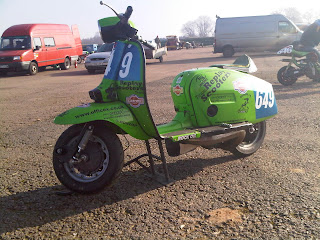 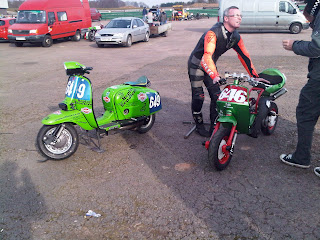 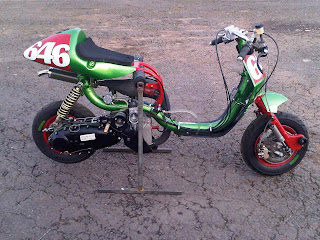 so.............  first session....... felt great to be on track and the new exhaust sounded great!  It was really cold so would be taking a while to get the tyre warmed up (Chris Geyton managed to bin his scooter at the second bend!)   .............  scooter felt good.....  but the new exhaust seemed to have changed some of the engine characteristics and although I had put in higher gearing than last year... it was not by enough as I was hitting 4th really early on the straight.

The first session was over all too soon............  as I pulled in Dave was still struggling to get the Gp 6 running as the clutch was permanently binding.....  decision was made to strip it and see what was up!

The second session seemed to come around really quickly and we were back on track.  The sun was out now and the track was getting warmer, so time to try a bit harder!  End of the session again came all too soon and towards the end there was just a little clutch slip starting.......

So adjusted the clutch and then checked on Daves progress which had been good and the clutch problem  seemed to have been sorted and it was firing into life!

The third session was just before lunch and the clutch slip was much more noticeable!  As was the gearing issue now I was getting more used to the power delivery of the engine.  I thought about stripping it to check the clutch and change the gearing but by now the sun had dipped behind the clouds and it was starting to get really cold.........  so opted to just adjust the clutch again and hope for the best.

Dave had now made it out on track and was enjoying riding the Gp 6 although gear change was an issue and will need to be modified!

Next session.....  I managed a couple of laps and then called it a day as the clutch had totally given up the ghost and there was virtually no drive at all!

So we spent an hour or so chatting and catching up with other riders and spectators, including Kieran Doherty - a world renowned photographer who is hoping to attend a few meetings this year to complete a photoessay on scooter racing.  Check out http://www.kierandoherty.typepad.com/kdblog/  and www.kierandoherty.com for his work.

The clutch problems will obviously need sorting out, but the exhaust seems to work well ......  I guess some new experimentation with gearing will be needed so I am hoping to do a couple of tests or track days to iron this out during the year.

First race is back at Mallory Park on Easter Monday .... 5th April........ looking forward to it!
Posted by Paul Green No comments: