Hello All! 2009 is here!
I Can't believe its more than 4 weeks already since the last update!

8 weeks to go until the official pre-season test day at Mallory Park on 27th March. This date is organised by the VMCC who are the main organising club that we race with. The test day is always interesting on a number of fronts.

Its the first time that many people break cover with new bikes, new paint jobs, helmets leathers etc! It's also interesting as the scooters and bikes will spend a fair amount of time on track together so its great to see the comparisons in lap times.
Theres a few riders swapping classes and coming out on new bikes this year .... some are secret .... some aren't.
It seems like quite a lot has actually been going on behind the scenes during January... it seems to have been non -stop! We had the BSSO agm on 17th January, which was held at the new location of The Village Hotel at Walsall, organised by John & Sharon Woods. The AGM itself was actually a fairly quiet affair this year, with only 2 2 motions, one which was not approved, and my own, which succeeded. I proposed that we have grid positions for the following days racing rather then weekends. We had some failry in depth discussions as a result on how we actually prepare the grids...... a couple of good ideas being thrown up! Watch this space!
The evening meal and presentation was all teh better for the scooter racing slide show prepared by our very own club DJ Tim Simpson. It was great to see some old pics from baitings Dam, which certainly brought back some great memories for me of helling up that hill trying to miss the sheep shit! I even popped up a few times myself on the slide show!
After the meal we enjoyed a little dancing around........... was great to be on the floor dancing to a bit of ska and even Teenage Kicks!!!!!!!! ;) A special night indeed.
The following weekend was taken up displaying my race scooter on the VMCC stand at the Telford Classic Race Show. The VMCC guys made me welcome, and a few people took away the leaflets I ran off. 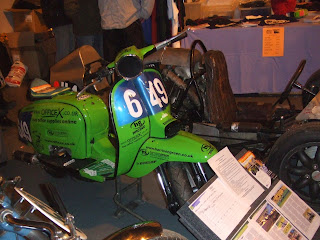 Earlier in January, myself and Dave Crampton went up to see the setup at Lambretta Cottage who have very kindly offered to help out with some sponsorship for the 2009 season. Zak and Julie at Lambretta Cottage have an absolutely fantastic set up, and its very uplifting to find such warm, friendly and genuinely helpful dealers in this day and age. They are helping me out with non specific race parts, and Rock Oils. I'm also testing some Heidenau tyres for them too. Many Many Thanks Guys, its really appreciated!
Lambretta Cottage sell their parts from their web site - www.lambrettacottage.com
.... and also from their Ebay shop - http://stores.ebay.co.uk/LAMBRETTA-COTTAGE-RESTORATIONS 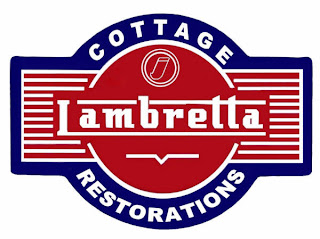 ... I'd ask anyone buying general parts to give them a call, or take a look at their web site or Ebay shop - remember its good to support those who support Scooter Racing! They are also LCGB super dealers ... and I'm sure if you tell them I sent you.. they will look after you! :)
What else...... phew... theres more! I've spent an evening, and yesterday spraying Dave Cramptons Group 6 Gilera Runner..... no prizes for guessing what colour! Daves making a return to teh track after a break of over 20 years! It all started when he bought a Gilera Runner 125 as a cheap little project.... except as often happens with these things ...... it wasn't cheap, or quick for that matter........ but now at the best part of £1800 later its just about ready to go as a group 6 !
Posted by Paul Green No comments: