Well ... we are just about through July now, - no race meetings this month!

I was quite pleased with how the scooter ran first time out at Mallory, but I was pretty disappointed with the riders performance - i.e me!

So i figured some track time is necessary to get some decent practice. I felt ok straight line, and braking / slow bends, but really never felt confident at all in the high speed and very very long Gerards bend at Mallory.

I'd never raced at Mallory before and didn't actually appreciate just how flipping long that bend is! I read somewhere its the longest single race track bend in the world...... don't know how true that actually is (!) but it sure goes on for seemingly miles! I was looking at some aerial pictures of Mallory, and a plan of the track and you spend a heck of a lot of the lap on Gerards!

So I found out that Mallory do open motorcyle practice most wednesday afternoons. You just need an ACU licence, and a bike that would pass scrutineering ( if there was any!) Also there were fellow BSSO competitors Scott Chapman, Chris Taylor, and Ed Hocking (Captain Tightwad). Steve Conneely and Martin Wing also turned up to spectate. They were there to see the first exposure(!) of the scooter built on a very tight budget (£285 so far!) by fellow blogger Captain Tightwad. No-one really knew Tightwads true identity until now, as Ed was building the scooter in secret!

so..... heres the Silver Dream Machine!

Eds done a great job of begging stealing and borrowing to get his bike on the track..... and not to say brave as well - drum brakes - they are the future!
It just goes to show you can at least get on the track without spending a fortune!
Click > for Captain Tightwads blog 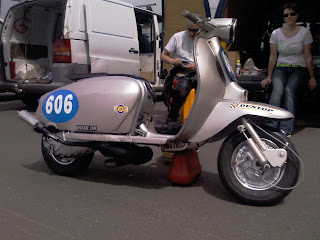 So...... how did it go? Well, i lost most of the first session after a rear brake pedal issue - it has hanging loose! dodgy thread, so only managed a couple of flying laps really!
Second session was better, and immediately on second flying lap was under me best time from the first time out at Mallory last month. Steady improvement continued, and by the end of it i'd gained a bit over three seconds a lap, so was quite chuffed. Still not feeling anywhere near comfortable in the fast sweeping Gerards, and having 600cc bikes and supermotos blasting past you doesn't really help matters! Ed and I were taking a wide line through Gerards to give the much faster bikes the inside so we could stay safely out of their way ( well most of them anyway ! lol )
It was very hot out there though and after 11 or 12 laps we'd about had enough lol.... sticky, sweaty and boiling up inside those leathers! 12 laps is surprisingly tiring, and you certainly know about it!
So a little tinker and check over, refuel, and away we go in the third and last session for the day.
We were straight out this time early doors, and again, immediately faster than the prevoius session. Tyres were really coming in now and the Dunlops felt so sticky. I gradually felt much more confident, was loving the section from Edwina's up to the bus stop, even diving up the inside of a bike at one point which made me grin a little under the helmet. Ed was leading me on coming around the outside and passing me several times round Gerards, then I pass him back after Edwinas up to the hairpin, but it was good fun and gave me something to chase which helped me gain confidence and speed for sure...... so cheers Ed......
after about 12 laps fatigue was setting in and i reckon we'd peaked! we found ourselves in a big group of way faster bikes at this point so we tried to stay out of their way a bit! i had a bit of a tank slapper moment and the session was nearing its end. But we still managed 16 laps in all, but we were about shagged out!
I ended this session a whole 6 seconds faster than first time out, so overall I was quite chuffed. Still a long way to go but was feeling much better on the bike after 13 years away thats for sure! Tyres were very sticky, and worn pretty far off the side, so i was quite chuffed as they passed Mr Conneely's test ! They certainly showed I'd been trying thats for sure!
Performance Art were there taking pictures, which they publish on their web site which is a nice touch as you can buy them....