Cadwell Park _ July 5th - A Bad Day At The Office

Cadwell Park is a local circuit to me, so there were quite a few friends coming along to support from my local scooter club - Grantham Day Trippers - as well as Sponsors Lambretta Cottage.
I picked Dave up on the way and we got to Cadwell for 7am nice and early. Set our base up next to John Howe and Darren Glenn..... always good guys to have some banter with! New gazebo went straight up with no problems, and we had a terrific base to work out of!
Scrutineering was no problem, so I added 6 litres of finest AvGas to the tank ( more on that later!) and then it was off to join the queue for noise testing! This is a new thing, and every bike going on track at Cadwell has to be noise tested, to ensure it's below 105db. I was confident that this would not be a problem as I'd been tested only 2 weeks earlier at the track night where I went to test.
The noise testing was always going to be a hassle with so many people to get through it. Of course the race scooter has no kickstart, so it has to be bumped off, and then I took my place in the queue........ this was a queue which seemed to move pretty slowly and I was over 20 minutes till it was my turn! Went through fine, and got my little sticker which is valid for 4 months apparently so no need to be re-tested next time!
So.......... off to practice session...... and this is where the first problem started. I'd done a test at Cadwell two weeks earlier, and used some carbon ceramic pads for the first time. Although initially they were good, after 3-4 laps they became really inconsistent before grabbing the disc so much the front wheel was skipping and locking at the slightest provocation...... which is not a great experience! So I had opted to fit the standard Nissin pads from my road scooter in for this meeting. Unfortunately they did not work out.... whether its because they had been slightly worn to another disc ... I'm not sure, but after an initial couple of laps where they obviously got heated up, they faded like crazy, and at Mansfield, heavy braking down hill, I had nowhere to go except straight on and up the grass!!!!!!!!!!! A few hundred yards on at the hairpin, and I was almost up the escape road! Oops!!
I had also been experimenting with gearing, and was a little unsure about the gearing I'd selected, but that seemed to work out well, and along the straight I was able to pass a few people and match some of the quicker riders for straight line speed...... problem at that point was stopping at the end of the straight!
Very fortunately, Zak and Ju had arrived from Lambretta Cottage, and had brought me along some new Kyoto pads to try....... so I set about changing them for the races.
We were called for the race pretty early and sat in the holding area for about 10 minutes with the engines running, before being moved down onto a dummy grid on the main straight for a whole race distance - 15 minutes+!
So.... sighting lap..... the new pads felt ok at the front and I was braking a lot to ensure that they were worn in as much as poss in the limited time. This was a good old fashioned flag start, which I anticipated well, and I got a decent start up the hill round Coppice bend and onto Park straight..... the first time down the straight was a bit mad with plenty of jockeying for position into Park Bend. I'd made up a few places initially, but there were some very quick guys behind me on the grid who inevitably came by. The next 4-5 laps were just great...... I was in a 4 way battle with Gaz Birch (again!), John Woods on his new small frame, and Kevin Griffiths on his rapid 230cc TS1. For several laps we passed and re-passed each other, giving the commentator some cause for excitement by all accounts! Gaz was a little quicker up the coppice hill, and had a very slight edge in top speed on the straight, but I had an edge under braking at the end of Park Straight, and also at Mansfield and the all important hairpin.

Exiting Hairpin with John Woods, and in front of Gaz Birch and Kev Griffiths
on one lap, Gaz tried his very hardest to stay in front, but went into the hairpin fully locked up and weaving all over..... which distracted me and I missed my braking point and we both went wide, allowing John Woods to nip under us ....... but i got a superb line and drive out the hairpin, and got him back....... this basically set the tone for 4 laps of dicing!

Missing the braking points!
Then.,...... horror......... going up Coppice, and onto Park straight.... a misfire...... then motor cut out.... restarted....... Arm up I coasted and l stayed out of the way of the guys behind me........ coming down into Mansfield it cut out completely - Game Over.
Sitting dejectedly with the marshalls, I couldn't quite work it out what was wrong.... ignition? Carb? I checked the scooter... nothing obvious.... until I casually checked the fuel.... EMPTY!!!!!!!
How the hell had I used 6 litres in 4 practice laps and 6 racing laps!!!!!!!!!!!!!!!!!! Then it hit me....... 20 minutes running at the noise test, and 15 mins on the dummy grid! That must have used way more than I would have thought.
So very sadly it was the journey of shame in the recovery van back up to the pits. I was not alone though!!! Steve Wright was also there - broken throttle cable! And John Balcomb with a blown engine.
I was gutted to have blown the best potential finish yet by running out of fuel. Lesson very painfully learned to allow extra for noise tests and dummy grids! 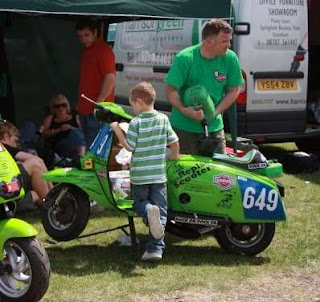 The long break till race 2 seemed to pass very slowly and I spend too much time in the sun. Lining up for race 2 - plenty of fuel in ! - I had a blinding headache.
I soon forgot about this as the flag dropped. A gap opened to the right in front of me but it was the wrong choice as I then got very boxed in.... the left would have been the way to go! So a few places lower than race 1, I stayed with Tony Rudd's Charlie Edmonds tuned Grp 4 and out braked him at Park to gain a place. Tony came back at me around the gooseneck and we had a right tousle down to Mansfield and the hairpin..... when his engine power got the better of me up the hill exiting...... the next few laps were ok, but i was now experiencing rapidly fading brakes, and despite having the straight line speed, was being caught as was having to brake earlier and earlier each bend.... and there were a few scary moments when the grass loomed!
Race over and up to the paddock, I stripped the pads out to find about 30% of the pad surface had crumbled as the pads had started to break down...... at least that was the explanation!
So....... despite a fantastic time tousling in race 1 it ended in a gutting non finish, and rubbish second race.......
Cadwell does seem to be a little bit of a jinx circuit for me as my only other non finish was also there last year when I had an ignition failure.....
It was particularly upsetting as so many people, friends, family and sponsors had come along to watch.......... sorry people.
Normal service will hopefully be resumed next race!
Posted by Paul Green No comments: