This weekend sees is one of the years biggies as scooters return to the legendary Donington Park circuit.
We will be providing support races to the fantastic Superstars International Series.  This is an international series featuring some awesome machinery, and drivers including ex F1 start Johnny Herbert.

I am hoping to make a return to the track after having to miss the Pembrey race.  I think racing around the full 2.5mm GP circuit on a scooter has to be an almost unique experience of a lifetime to follow in the wheeltracks  of the likes of Ayrton Senna and Valentino Rossi.
I have been fortunate to be able to put this event together after making contact with the organisers BARC two years ago.  We raced then supporting British Truck Racing and the spectacle of scooters impressed them so much they were glad to have us back again after I'd contacted them.
As always putting together a race meeting is a tough job, with lots of ups and downs and seemingly endless hoops to jump through.  But its all sorted now and the riders are most definitely well up for this one.  Stuart Day and John Howe will be making their first appearances in 2011 and will be hunting down the front running bikes.
Guy Topper is on top form currently aboard his super quick DJ250 'Cooler' but at Pembrey and Mallory he was joined by stablemate Doug Turner also riding a heavily developed 250.  Multiple champion Charlie Edmonds will be looking to keep them in check despite a cc and power disadvantage.  No doubt the likes of James Campen and Chris Geyton will also have ideas on being the front running Group 4 scooters!
Meanwhile the auto's of Josh Brown, Craig Bewey and Joe Ravenscroft will be giving chase too and no doubt be looking very fast round Donington.  The bigger cc auto's of Scott Chapman and Keith Terry will also no doubt be picking up their fierce on track rivalry as they also chase down the pack.
Its going to be a biggie!
Pretty much everything is in place now, just missing one thing to make it perfect.
Posted by Paul Green No comments:

Pembrey is a chufiing long way down to deepest South Wales.... 245 miles,

After Mallory I was still struggling health wise so decided to sit this one out from a racing point of view and just go watch.

The VMCC meeting was not well supported with many people opting to stay away.  We still had 31 scooters across two grids though!

It must be 20 years since I went to Pembrey last, and I had forgotten just how crap it is for spectators.  For the racers the main problem first off was the very blustery wind which seemed to be coming from all directions at the same time making things very inconsistent.  Rain was in the air too.

I parked up with Chris Geyton who \i was going to help over the weekend.  Chris had just taken his newly built engine down to Replay Scooters for some dyno testing and was puzzled by the results which showed a major drop in power from the regular dyno used by SRP to develop the engine.  Its was even more puzzling as once on track Chris was just flying.  He was right on it and was up with Charlie Edmonds for the first few laps and matching his lap times.  Race 2 was wet and Chris was all over Charlie as they both tried in vain to chase down the super rapid Group 6 monster of Guy Topper.

The wet 2nd and 3rd races really made me wish I was out there as I always do so much better in the wet! Although watching race 1 in the wind gave me no such desires !

The auto races were great to watch with Scott Chapman and Keith Terry swapping places in a right old ding dong.  Once Scott had his bike fully sorted though he was away in race 3 and mixing things with the fastest of the zips.

The changeover between races is really quick at Pembrey and with a lower entry more of the VMCC classes were combined, meaning less races overall.   So we had negotiated an extra race on Saturday to give us a 3 race day.  The races were 10 laps long so these were long races all weekend and some of the riders were looking a bit jaded come Saturday evening!

Saturday night was best described as wet and windy!   I'd eaten my burgers and bacon so went down to the bar with a few of the other guys .  A nice evening ensued with the usual scooter  and racing chat and assorted garbage being spoken and worlds put to rights.  Of course the heaviest wind and rain was as we came to leave the bar and walk back to the van......  so 10 minutes was spent waiting in the foyer for the wind and rain to die down before making a run for it!

A sleepless night ensued kept awake by wind and rain before Sunday broke to reduced wind ( well - a bit ) and a strange yellowy gold thing in the sky!

Sunday saw Guy Topper and Doug Turner flying away again on the Group 6 bikes, Charlie Edmonds again being the fastest of the Group 4 bikes, with Chris Geyton and John Woods both having a right old tousle......  but as I watched from the hairpin I heard the tell tale click from Chris's bike of another broken gearbox...... just like he did at Mallory as well!

Oh well.... overalls on and gloves on to help sort things out!  Chris stripped the race bike whilst I stripped the spare engine to get the gearbox out of it. We ended up having to swap everything including the layshaft due to the damage.

In the last race Chris's motor had gone right off......  60 laps over the weekend had taken its toll I think.

This was the first time in 2 1/2 years that I had been a spectator and it was kind of nice not to have the pressures that a race weekend brings.  The journey home continued my hate / hate campaign against Wales when I caught a speeding ticket.  Nothing to do with Wales is ever good for me it seems.....  bloody place!

Hopefully I'll be on track for Donington Park next weekend........   My least favourite type of circuit but its an experience to ride the classic full GP circuit as ridden and driven by heroes like Rossi and Senna.
Posted by Paul Green No comments: 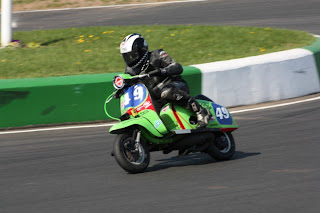 Well..... Mallory Park at Easter seems a long while ago..... Maybe that's because it was !


I havnt updated the blog for ages now..... Apologies..... But a few months of illness and other pressures have meant I have not really had the time nor inclination to update if I was brutally honest !


We had a successful test day in early April, with the main changes to the scooter being the new paint job, a new Guy Topper designed and built exhaust, and a new Dellorto carb. A few other changes included a new Jahspeed race seat which looks great !


So....... With gearing modified with what was learnt on test day it should be close to spot on..... Which it was.


unfortunately in the run up to Mallory I had a very stressfulntime and was feeling pretty I'll really so was not in the best frame of mind for racing.


First race I got a great start, but then after first couple of laps drifted back as fatigue quickly set in really. A good tousle with new rider James Lancaster was good fun.... James is also on a Replay tuned and prepared bike. His bike has a little more BHP on the dyne and James being young whippersnapper of course he only weighs 4 stone so he was carrying good straight line speed. 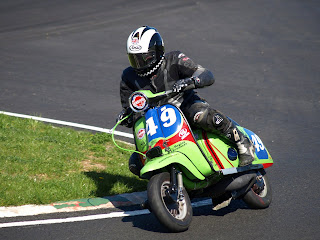 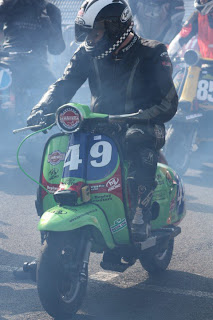 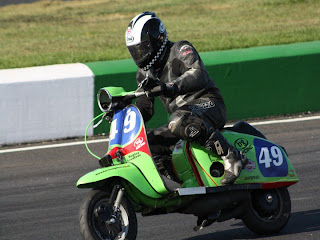 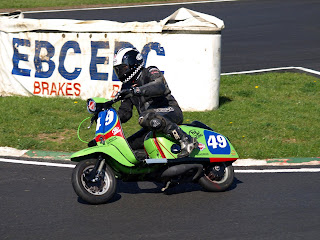 I was parked up with Chris Geyton who will be riding under the Team Replay banner this year whilst SRP is in 'sabbatical '. We wholes away the time between our two races by stripping his engine to replace broken gears! Chris had actually managed to complete the race despite having Two broken gears. I stripped the spare engine to extract the gearbox whilst Chris stripped the race engine to allow us to swap them over and get him out in race two. The change went smoothly in the warm sun and of course as always attracted the interest of spectators keen to see the insides of a broken engine!


in the second race I had a (thankfully rare) mechanical gremlin and the gear cable slipped and it lost me first gear as I tried to select it on the start line! I had to pull away in second as it wouldn't select so naturally I was eaten up off the line by the rest of the pack. Adrenalin kicked in and I put my head down and quickly caught the tail enders back up, and on lap 2 went back past James Lancaster through the Edwinas chicane. This was to be short-lived though as up to the hairpin I still could not properly select first gear and then as I progressed on even 4th was tricky as the slop in the cables just seemed to get worse.


There was no real option but to cruise round and just get a finish and collect some points.


The meeting proved pretty interesting for the spectators as some unusual faces were having superb days. Guy Topper was absolutely flying on the cooler 250 and was phenomenally quick leaving the rest of the field trailing by a country mile........ And Guy also had a major hand in preparing Doug Turners group 6 bike which was also going extremely well propelling Doug up to the front. Also notably fast was John Woods on the blue SS 90 which has really come on now John has it setup right.


So overall for me a disappointing start to the season really, illness and stressful times had conspired to mean that I was not really mentally in the right place for this racing malarky. :-(
Posted by Paul Green No comments: