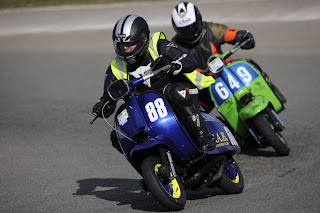 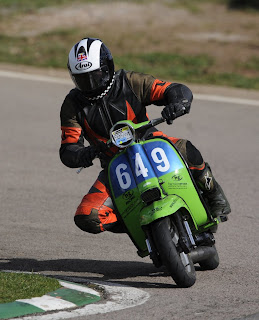 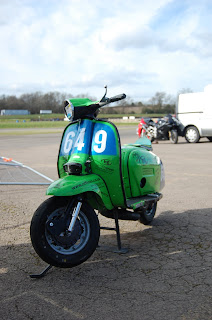 Friday 6th March and about 8 scooters entered the Focused Events Track Day. There would have been a couple more, but various scooters weren't quite ready!

Stuart Day brought along his Ducati, and also his SRP Racetech road scooter. Jon Uffindel was there on his bike, a couple of scooters from JB tuning, and a new rider with a Kegra prepared Group 4 scooter. Kevin Griffiths on his street class TS1 and Brandon Smith also out for the first time on track. Paul Priestley also brought a couple of scooters to try out. 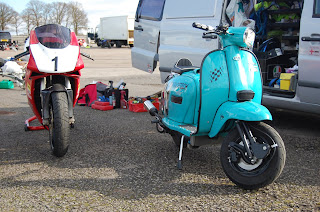 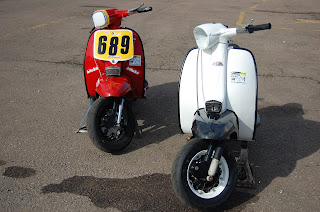 Kevin's Street Class Scooter, and Brandon's race scooter
Ex Scooter Racer Keith Terry was also there on his R1..... wonder how long till he's back out on a scooter?

A few racers also came along to spectate, Tony O'Brien, Scott Chapman, Jigsy, Ed Hocking, Martin Wing, Ciro Affronti, Chalky White were all in attendance as well, so there was a good number of us.

So............. how did it go? Well.... thankfully it was a test, so a few odd niggles on a new engine are allowed! I was a little late getting there, so it was initially a bit of a rush! Jigsy had arrived with some fuel, so we promptly mixed it and filled the tank in readiness, checked tyre pressures...... went down to the riders briefing, then it was straight on track with the first novice group!

After 3 sighting laps slowly behind a pace bike it was back down the pit lane, ready to go again.... scooter felt great, the engine was pretty smooth in fact I'd probably say smoother than my road scooter! Power delivery is really smooth and it pulled really well out the bends. A good improvement on last years engine! I was certainly grinning down the straight!! Chalky White did a great job on the engine!

So I had to sit on the side lines and wait for the session to end... luckily it's downhill to the pits from there!

Once back in the paddock, as it happened Chalky White and Ciro suddenly appeared just at the right moment! A quick check of the stator plate wiring revealed no feed from the pick up..... so off with the floorboard, cowling and flywheel and the reason was immediately obvious! Two loose wire on the new BGM stator plate! The main red feed and the green earth had both broken their solder. Ciro managed to suddenly find a blow lamp from somewhere or other in the absence of a soldering iron we heated a metal rod with the blow lamp to form a make piece soldering iron! The red wire was quickly re-soldered, but the green proved somewhat more troublesome as it was difficult to get in with the solder. The decision was made to just undo the pickup bolt and earth it to that instead! Problem solved, so all back together and ready to go!

Unfortunately by now we'd missed most of the second session and only got 2 more flying laps in before the session ended. Good news was that with only 4 flying laps done I was already matching my best previous times.

The niggles continued as I went out in the third session! Somehow I'd dislodged the choke cable between sessions and it was trapped half on! So this erm.... well... somewhat compromised performance! I was improving lines though and decided to stop out and ride around things just to get some laps under my belt, albeit 2-3 seconds slower than previous session.

So for session 4 the choke problem was sorted and resolved! OK... let's go properly now then!

First flying lap was straight under my previous best , and lap time continued to tumble down for 7 laps! I was really pleased with how the bike felt, and I didn't actually feel I was pushing overly hard, just concentrating mainly on trying to build my speed up gradually round Gerard's which is my nemesis as I have not been feeling at all confident through fast sweeping bends and as Gerard's feels about 4 miles long it can be described as nothing other than a fast sweeping bend! So it was really pleasing to end that session with the stopwatch showing a full 3 seconds quicker than last year. There's still another 7 seconds to find to be competitive to where I'd like to be...... but we're getting there slowly! It's all going in the right direction.

The next track session saw me stuck in some traffic for the first few laps as I had gone straight out with the main pack and despite a few guys being on some powerful sports bikes, they were braking pretty early for Edwina's and the hairpin, in fact so much so that I actually overtook 3 bikes in one go up the inside at the hairpin, which certainly made me smile in my helmet. One of the riders (on an R6) obviously must have been upset as when he inevitably re-took me... which took him until after the start line.... he was only inches away from me and chopped right in front of me...... perhaps he didn't like being outbraked by a little Lambretta!

Once in clear air the lap time dropped down again to match my new best before the exhaust tone changed and it was most definitely blowing! It was now very loud so sadly it was game over for the day! Returning to the pits and examining the exhaust proved this beyond doubt as the exhaust was split adjacent to the manifold about 3/4 of the way around it with a 2-3 mm gap opened up! Sticky offered to weld it back up as his workshop is only 20 minutes away... but it seemed a mad rush to possibly only just be able to make it back for one last session, so it was trackside now to watch a few sessions from around the track! 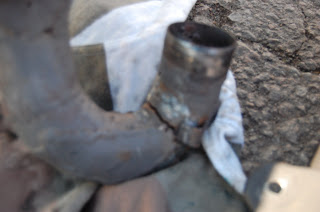 The offending split exhaust!
So overall.............. a good day and it was pleasing to have made good progress on getting the times down, I feel sure I had at least a couple of seconds to come as I was not pushing mega hard.

It was good also to have these little niggles on a test day rather than at the first race, so it certainly proves that test or track days are well worth doing!

The Focused Events Team had a great, well organised format, and the scooters fitted in well with the novice bike class. The day was £69 for 6 20 minute sessions, so it's like half a seasons racing track time in one day! Well worth it!

A few small jobs to do on the scooter, and Ed Hocking has the offending exhaust to re-weld! So I'll keep the blog updated with this and a couple of other small improvements I plan before the next outing which will be at the official BSSO / VMCC practice day on 27th March back at Mallory! Can't wait! 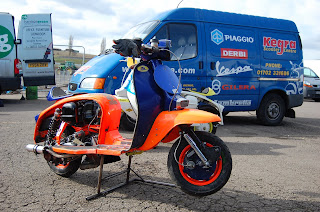 JB's Group 4 bike after being chucked into the mud at Edwina's
Posted by Paul Green No comments:

Well.... The race season is getting closer! It's 6 weeks now until we will be sitting on the grid at Mallory Park for the first race of the season. The winter has seen many of the racers rebuilding bikes so it will be interesting to see what everyone turns up with at the first race! I think there may be a couple of surprises in the pipeline.

The first race this year is Easter Monday at Mallory Park. Easter is falling a little later this year than last so hopefully the snow that was on the ground last year will not be repeated!

March 6th there's a Focused Events track day and they have allowed scooters to take part (full race scooters with ACU licenced riders). Stuart Day has done a few track days with them, but this will be the first time that they will have had 10 or so scooters! We will be on track with their riders (mainly modern sports bikes) so it will be .... interesting! We will be circulating in 20 minute sessions, with fingers crossed 6 sessions over the day, so quite a few laps!

Then on March 27th is the official pre-season practice day also at Mallory Park. This one is run by VMCC, and we will run in 10 minute sessions this time, possibly also on track with the VMCC race bikes too, depending upon how many scooters are entered (i.e. we may have our own sessions).

Sometimes scooters take different (faster) lines so depending upon numbers we may run seperately, although it is only practice, so no-one should be going too lairy (!)

So if all goes well, then those two test days will give me lots of laps of Mallory. Which is just as well as I would really like to find 10 seconds from somewhere! I reckon the majority is sitting in Gerards which is my nemesis bend! There's also a bit sitting in the bus stop - I didn't really get that clean at all last year, but I'm hoping that the extra power from the new engine will help things along too of course!

On the BSSO front, I've been working with Eden who did the Scooterotica forum (www.scooterotica.com ) and we have now got a new BSSO FastScooter forum.... you can visit it at www.fastscooter.org
Downside to the new forum is that we have to start again with all the posts, but we now have full control of it and lots of new features too!
Next update in a weeks time after the first Mallory test!
Posted by Paul Green 4 comments: