The last race at Mallory saw me fit a major new upgrade to the scooter. As many will know from reading the blog I have had a struggle with high speed cornering stability and confidence. After much consideration and advice I came to the conclusion that yes..... the front end of the scooter was too stiff.
The previous setup had consisted of Taffspeed internal springs, which are progressive and a good upgrade from standard. The standard set up has a 7mm nylon bush at the top of the springs, I had some bushes machined from stainless steel, in a variety of sizes and the ones I had fitted were 14mm, which were stiffening up the front end massively, effectively pre-loading the suspension.
The end result of this very stiff set up was that the front end was not really absorbing much in the way of bumps at speed, so the front end was wandering around. It was Tony O'Brien who lit the light bulb that made me realise this in a conversation when he asked me if my high speed cornering problem was me or was it the bike? An interesting question..... and it set me thinking!
On a trip up to main sponsors Lambretta Cottage, the brand new BGM front dampers had come into stock, and I sat admiring the engineering for some time! Do you fit them to the scooter or hang them on the wall to look at!
First thing about them that really surprised me was the weight.... they looked really heavy - but they are no heavier than standard dampers! The quality of engineering work is truly brilliant. I reckon they are among the best engineered products I have seen for scooters.
They feature a 16 stage adjustable damping action. This is achieved by simply rotating the knurled section at the bottom. There are 16 very definite clicks and the adjustment can be easily made on the scooter.
The dampers are also cleverly designed to fit into standard Lambretta forks links and damper mountings. Many other alternative dampers need modified mountings , so this ability to fit into standard forks is a great feature, and allows the dampers to be easily fitted or even swapped between scooters easily.
So.................................. how do they perform in action?
I fitted the dampers prior to Mallory Park race meeting. As you may remember - this meeting was wet! ..... very wet! This immediately showed the benefit of the easy adjustment. In the wet weather I decided to slacken off the damping action so set the dampers in position 5 of the 16, and immediately went helling down the straight into Gerards to see how they felt!
The answer................ rock steady, and in the first wet practice I even passed a couple of people around Gerards! The front end felt certainly softer, and more stable.
I left the dampers in this position for the first race - which was also very wet! I think the new setup and damping action was very instrumental in the fact that I was able to pass a few people even around Gerards! My fastest lap time in these very wet conditions was only 4 seconds off my previuous best dry time!
The second race was dry ........ so the dampers were tightened up to position 9. Obviously in the dry you can push harder than the wet, so I tried this setting. I took more than a second off my previous best time, and I honestly think the majority of this was made up in Gerards... the fast sweeping bend that had been my nemesis so far! On the first lap I passed people there and was considerably more confident in my ability to turn into it at high speed.
So.................... are these BGM dampers worth the hefty price tag? Well if you are on a road scooter cruising out to a few runs...... probably not! If you have a tuned scooter and ride 'with spirit'..... yes for sure....... if you are racing..... hell yes!
The dampers are only available from a limited number of specialist dealers. Mine were supplied by Lambretta Cottage See the web site to order
Lambretta Cottage stock BGM products from these new front dampers, and the matching rear damper, to BGM high output stator plates and the brand new BGM carburettors.
You can order easily by phone, give Zak or Julie a call at Cottage...... 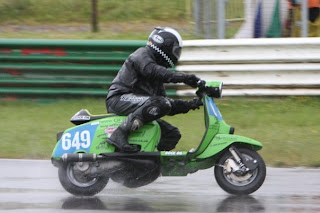 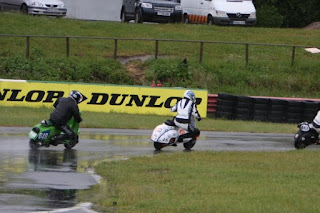 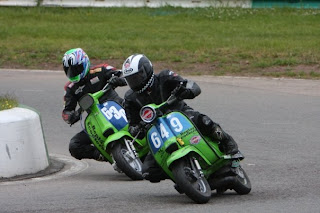 I was pretty pleased to leave Mallory after my best two results yet from a full grid, and the promise of a good mid pack grid position at Cadwell Park. The improvements to the front end of the scooter, and especially the addition of the new BGM dampers has made a good difference to the handling and my confidence in the front end.
Posted by Paul Green 1 comment: