So......  after the winters wait it was over to Mallory Park on Easter Monday.

I loaded the van and all the gear on Sunday afternoon. Miles was out for the afternoon and I couldn't be bothered to wait for him to get back - mistake!  A little after I'd loaded everything my back started to be very painful, which steadily got worse as the day and evening went on.  I actually fractured vertebrae a few years ago and my back is basically a bit of a mess and will never really be right again.  There is a lot of damage and I do have restricted movement in it .  The break was caused by a little 'incident' when I fell off the back of a 14 foot half pipe whilst skateboarding (!!!!!!)

So the pain I was now in was actually the worst it has been for many years.  I dosed myself up with painkillers and hoped for the best.... and vainly hoped that the adrenalin would overcome.... alas not!  Scrutineering was smooth, with no issues.  It was great to see my old mate Roland Davis back helping out with the weighing equipment for the controversial new weight regs this year.

So - onto first practice..... my doubts about the clutch proved to be correct!  I had experienced clutch problems on the test day and again when trying to do some dyno testing at Replay Scooters... and it just didn't 'feel' right somehow.....  it managed to last a whole lap and a half before starting to slip and give up the ghost.   So practice cut short ...... the bike was straight on its side being taken apart.  Fortunatley I had good mate Johnny Gilbert to lend a hand, and Chalkie White soon appeared to help out too.

The top cork had managed to free itself and had spun out the top of the clutch bell..... which was a bit odd as this had never happened before!  The corks had also partially broken up with plenty of cork floating around in the oil!  They were comprehensively destroyed.

After much head scratching as to why this had happened Paul Baker from SRP Racetech helped out with the load of 6 new Surflex red plates, and with Chalkies help we did some pick and mixing of steels and with a little addition we had the top cork in its rightful place... and a test around the paddock followed by a little adjustment, fingers crossed showed it was good to go!

So.... first race...... a decent initial start of the line ..... well a little too decent thought the stewards who managed to dish me out yet another jump penalty!!!!  The scooter with the new exhaust felt initially strong, but as the race progressed it was increasingly hard to move around as my back stiffened up.... but more importantly whilst the new exhaust gives grunt out of bends, the change in the engine characteristics became more noticeable.... and it was very apparent that I'd lost some straight line speed on the straights.

Race two was pretty awful and a real struggle to be honest, and I was pretty glad when it was over.  But on the positive side I had two points finishes which was more than several others managed so I actually scored decent points despite all!

I was in bed within half hour of getting in and feeling and looking very grey!

Monday was a visit to my trusty osteopath for emergency treatment.... damaged facet joints in between the vertebrae .... ouch to the back...... ouch to the wallet.... it's likely to be 4 weeks worth of treatment to get it sorted....

As for the scooter...... well.... a dyno session at Replay made things clearer, and as I type this John Howe is remodelling the exhaust to allow the motor to rev and bring the power maximum higher up the rev range.  The exhaust was a prototype after all so modification is to be expected, but Jahspeed are onto it!

Hopefully the back will be sorted out for the next race!
Posted by Paul Green No comments: 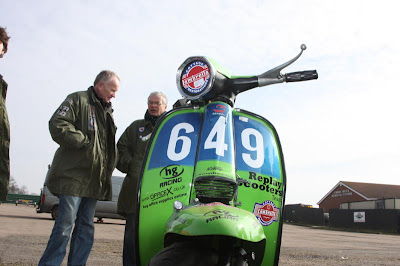 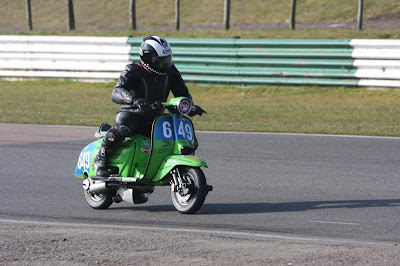 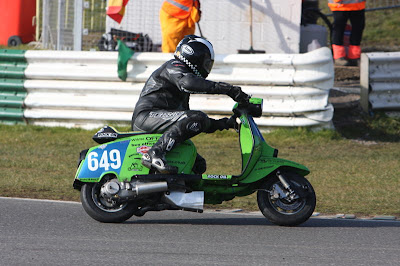 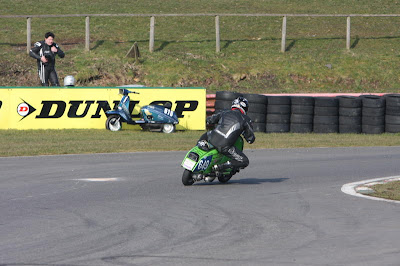