I really liked the Anglesey circuit last year which was the first time I'd been there (my second time on track). It's like the best features of a whole load of other circuits have been all built into one.... it's fab....... certainly amongst the top circuits in the country for sure.  It has a brilliant smooth surface, is nice and wide with a good variety of bends.... and a stunning coastal location.  Unfortunately this location is part of the downfall of the circuit as it is extremely exposed to wind, rain and fog coming straight in off the sea!

I arrived Friday night after the 200 mile journey and parked next to some dodgy looking multi-coloured fun bus. Turned out that this wagon was Darren and Wendy Glenn's latest aquisition....... it could only bring a smile to your face ....... and was pretty much a bargain. No indicators.... but hey .... can't have everything!

Saturday Race 1 ....... erm.... wet!  Fancy that!  I really don't mind the wet, I generally do a little better!  I had a good race and tousle with Mark Shirley and Dan Lewis and was reeling in Tony Rudd towards the end. Finished 13th which I was chuffed with.  It seemed as if no-one told Charlie Edmonds it was wet!  He was some 7 seconds faster than anyone else in the damp conditions!  Incredible!  He was trying out a new front tyre...... erm..... it works! 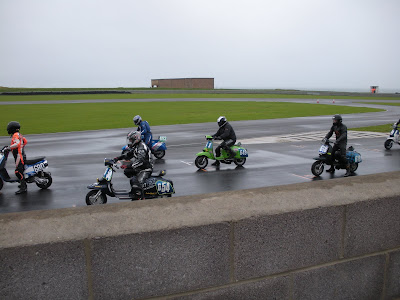 Race 2 was similar to race 1, except after lap 1 a persistent misfire crept in and gradually got worse..... I managed to finish the race but lost a few places towards the end as the motor cut out a couple of times...... hhmmmm water in the electrics?  Water in the carb?  Fair Chance

I managed to get the awning cover sort of secured between my van and Darrens funbus to try and get a bit of shelter ..... the awning had already been destroyed by the wind!  So I stripped the carb and cleaned it all out. Checked through the electrics and dried/cleaned everything through.  Unfortunately by the time I had done this we were past the curfew for running engines so I could not start it!  Fingers crossed for Sunday morning then!

Saturday evening had a lovely chinese from Holyhead.... mmmmmmm ...... and sat naughtily on the bed eating it!  Saturday might have been wet and wild outside but I was lovely and snug in the van...... never felt cold at all!

Sunday we started the scooter to try to make the sneaky extra practice, but it was a no-go...... misfired.... popped.... spluttered and died! Oh dear!  Another check of the carb, and a change of plug and all was well again!  Ready to go!

Race 3 was initially just damp, but part way into it the rain started to fall and the race was stopped after two people came off at the blind top bend.  As we stood awaiting the re-start the rain really came down..... well actually that's not true.... it went more across!  The start in the wet conditions soon showed all the oil on the track!  The dropped oil from previous races was shimmering on the water and it made it very hard to find a clean line!  Everyone was going very gingerly!  Despite this, my lap times were faster than the previous day and I had another good tousle with Dan Lewis as we reeled in Steve Pollit who was carrying the new BSSO onboard camera.  We passed him on the last lap and I went through a tiny gap down the corkscrew to pass him virtually on the rumble strip! 16th place across the line.

For the 4th race, conditions were drying a bit, but still wet and very windy which was quite unnerving on the straight as it shifted you across the track!  The formula had been set though, and it was another 16th place after another battle with Dan Lewis!

It was a good weekend of racing at this fabulous circuit despite the weather....... Cadwell Park is next...... the final meeting for 2009.
Posted by Paul Green No comments: