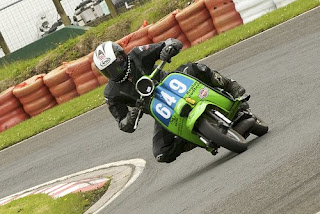 Well...... Three Sisters...... I've probably done more laps there than anywhere else! Just not in the last 14 years! I decided to drive up Friday night.
Scooterotica's Dan Claire had saved some space for myself and John Howe in an already crowded paddock. So it was unload the scooter...... a quick beer then settle down in the back of the van for the night!

Saturday morning brought cloudy sky - but currently dry! So..... out for practice...... I immediately felt really at home, and was quickly feeling good and even passing a few people! At the end of the session I had forgotten just how physically demanding Three Sisters is! You are always doing something, theres no time to relax and effectively the start straight is the only place you get to go in a (brief) straight line! Coming off the hill ( Cowards Summit) i felt confident and passed a few people under braking there.

Race 1
Was to be from 15th on the grid. The grid was very messy as we were not lined up on a dummy grid as usually happens, and our grid had been drawn up 4 abreast, but on the track we were 3 abreast so it was all a bit confusing with people being out of place and getting penalities. I had a wild start pulling an accidental wheelie which lost me some time, but I was well into the main pack and spent the first lap dicing with Tony Rudd and Dan Lewis and Doug Turner which was a first for me! the race soon settled and I had Mark Clipstone and Tim Simpson breathing down on me! I ended the race in 15th place with 5 peiple behind me! My best result so far..... I was happy to be back at Three Sisters! 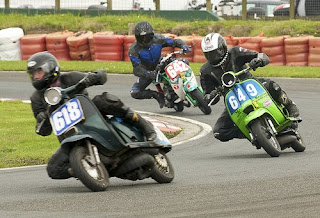 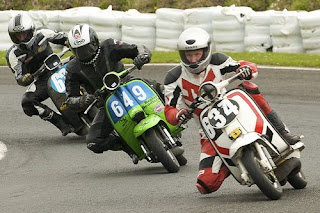 Race 2
This one was a difficult one to call tyres for as it had rained eralier and the track was part dry, part damp. The grid seemed split between wet and dry tyres. I had opted for dry!
A reasonable start again, but not quite as good as race 1. Coming off the hill I managed to dive up the inside - I was especially confdent here. Again in early laps I was in a tousle with a few people I never normally get anywhere near!
I was feeling good on the dry tyres, even through the right left flick in the centre that was very wet and the threepenny bit which still had some standing water in a couple of places. John Howe was on dry tyres and was particularly unhappy through that section, where I briefly passed him! ( Which became the subject of banter ALL night!)
Towards the end Doug Turner and I had a real tussle and indeed across the line I was only 0.16 secs in front of him, after being a little un-nerved by a big front end slide through the threepenny bit!
Ended this one in 13th place, helped by a couple of fallers - Stuart Day binned it chasing Charlie hard, and unlucky newcomer Dan Clare came off at the Threepennny bit resulting in a broken ankle! This time I had four people behind me ( would have been 6 if Dan had stopped and and Kim Deeney finished!) Good points scored!

Sunday brought Race 3.
This was a bit rubbish! We had been standing around all morning and our race was about to be called when we stopped for lunch, so it was nearly 2.00 before we got on track....... I think I was asleep! The only interest had been the wet / dry / wet /dry conditions leading to most people spending most of the morning putting tyres on and off! During this I discovered a stripped thread in the rear hub, so after a little running around, I was fortunate enough to borrow one from Mark Clipstione, and with a little help from Carl Neath it was fitted and ready to go.... at the last minute we plumped for dry tyres on the rapidly drying track. early in the race after the bad start I was battling with Tim Simpson which was good fun until his engine let go! Ove rthe race distance I had managed to lose about 15 seconds on where I'd been on the Saturday..... which led to Mark Clipstone being right on my tail over the line for the last lap. Coming through the Threepenny bit for the last time I drifted wide and this allowed Mark to go underneath me! Damn..... place lost 0.22 secs behind across teh line .... gutted and a little unhappy with myself! But it had been a good race with mark, and he had lent me his spare hub after all! End Result 15th

Race 4
Had a better start than teh first race with a few people behind me including John Howe on his rapid Group 6 bike. John was struggling a bit with confidence on new tyres ( I did tell him but just wouldn't listen!). I followed Tony Rudd and Dan Lewis again for the first few laps, then thing settled into a pattern again, with John Howe behind me, but plainly determined to get past me after the previous nights banter. with two laps to go he came by me along the start straight. I was quicker than him at the left hand hairpin, and through teh right / left flick, and the entrance to the threepenny bit..... so the gap between us increased and decreased as the lap went on..... into the last lap i really closed in at the left hand hairpin, and again through the left right flick where I was right on his back wheel. i almost dived up the inside into the threepenny bit but was not quite close enough. Johns line through the bend was perfect and his group 6 bike had incredible grunt out the bend - so he just had the power to get to the line first - the gap across the line 0.7 secs.... so three races were under a second gap at the line! End Result - 16th place!

There will be a few jobs to do on the scooter before the next race at Mallory in June. The muffler needs a little attention, and i need to find a new rear hub. The piston and ring will also need a thorough check.

The results in the championship are now calculated and amazingly I'm in 6th place in Group 4! This show the importance of finishing races!

Next we are onto Mallory!

Easter Monday saw the firts round of the 2009 BSSO championship at Mallory Park.
I was very much looking forward to it, after making some positive progress in teh two test sessions at my most local circuit.
Being local I could get there on the morning quite easily. Upon arrival I drove around the paddock a little and found a spot next to the SRP base, and also next to VMCC rider Keith Prime who is also from Grantham.

So..... hopefully the igniton problems I had experienced in pre-season testing would be behind me...... I set out for the practice session.... scooters were running in our own group. I immediately felt comfortable as I should do after two full tests there! i was really pleased that within 4 laps I had matched my best times from testing.... which was a good sign.
Our first race was not until lunch time, so after much standing about it was finally out to the grid for my last race wearing the dreaded orange bib! I was starting from 2/3 of the way down the grid, so I was hoping to hold my nerve round my nemesis bend Gerards and try and hang on to the pack!..... I got a reasonable start and was quite pleased with the first couple of laps hanging onto a few people. Phil Bevis binned it at Edwinas on Lap 1 which provided some excitement, followed by Stuart Day and the flying Tony Obrien having acoming together at the same spot later!

The second race was really late in the day - not starting until after 5.00! This is one of teh downsides as all this hanging around is tiring and you get a bit 'off the boil'.
The second race was similar to the first except I actually passed a couple of people around Gerards on the first lap! So things are looking up. Although lap times were slightly down on the first race, Gerards was actually feeling faster!

At the end of the day I had two starts and two finishes. There seemed to be that first day of term feeling about it with a few tumbles and crashed. Unluckliy for him Bert Conneely was the worst injury as he came off exiting teh hairpin. A broken shoulder and collarbone will see him out for most of 2009 .... but i'm sure he'll be back at the end of the season to play!
A big thanks to 2009 sponsors Lambretta Cottage and of course Replay Scooters for providing such a great engine.
Posted by Paul Green No comments: