After the run of bad luck and non-finishes in the first half of the season, coupled with some health issues that weren't going away I took the decision to miss the remaining races. 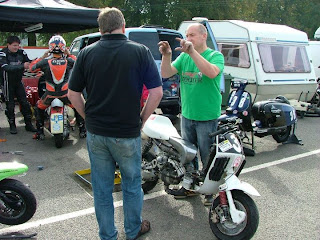 I also stepped down from my organisational roles with the BSSO and decided to concentrate on getting my health back to where it should be.

I had a huge amount of support from my fellow riders and had some wonderfully touching emails and messages.  I went to Pembrey, Lydden and Mallory as a spectator and managed to spend a fair time stripping engines and gearboxes for Chris Geyton!

The engine casing was repaired and the bike checked over for any other issues.

I spent the summer trying to relax a bit and get better.  I started cycling again and changed diet, and after some professional assistance started to feel much better by the end of September.

So half a stone lighter and feeling much better I decided to enter Cadwell as a last chance to be on track.  Unfortunately I managed to find myself banned from the race by the BHR committee which was a bit of a shock and somewhat of a storm in a teacup.  Its a whole subject on its own.... but lets just leave it that its now been sorted with a small apology from me and a big one back to me !

So I was allowed a race at Cadwell ahead of their committee meeting where I got the chance to put my side.....

I concentrated on just getting finishes.  The tablets I have been taking mess around a bit with balance, and after a summer off and the lack of track time, I really struggled with corner speed but the engine felt strong with good straight line speed so hopefully the mag housing problems are now cured! 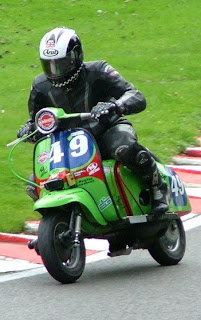 This was the final round of the 2011 Championship and was my worst year yet !   Oh well...... its behind me now and I have 7 months to concentrate on health and wellbeing for 2012.

6 times back to back Champion Charlie Edmonds has retired so Group 4 will be wide open next year! 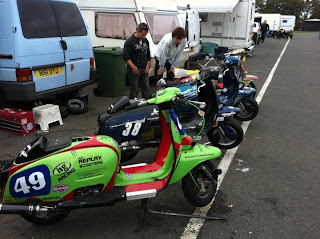