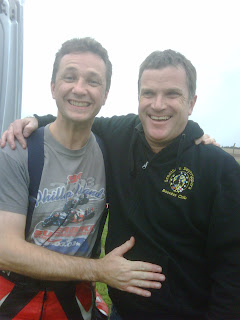 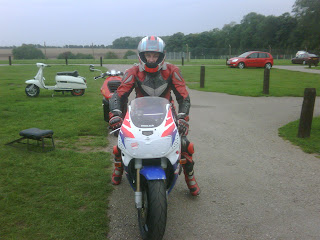 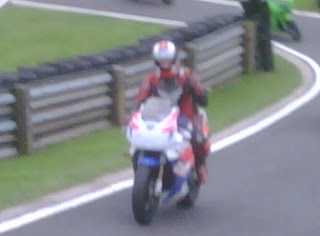 Well troopers, I've just returned from meeting up wth an ex scooter racing mate - Matthew Gooch - who was doing a track day at Cadwell on a borrowed fireblade.

It was great to meet up with Matt after not seeing him for maybe even 13-14 years!


His scooter racing career was cut short after a nasty accident at Three Sisters. His elbow was pretty much shattered and now he has a few lumps of metal in there to keep it all together. After struggling for the first few years withthe injury, he's now getting along fine and was certainly enjoying his laps of the full Cadwell Circuit. 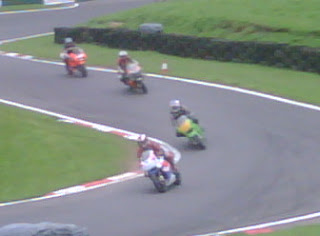 We had a good few discussions about lap times..... and just how quick the leading scooters actually are! Charlie Edmonds winning lap time last year was 2 minutes 2 seconds........ which would actually have been quicker than many of the 750cc bikes there today at the Performance bikes track day. Indeed Charlies laps are only 30 seconds adrift of Leon Haslams British superbike lap...... which in pretty incredible when you consider the machinery! 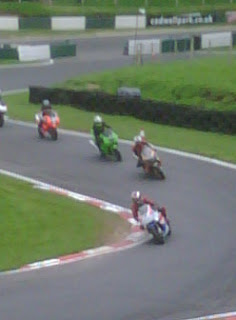 Sticking with Cadwell it was interesting to see Bert Conneely's post about when he took his Lambretta to a recent Cadwell Track day...... form the sound of it he certainly gave a good account of himself! I've been really impressed with Berts riding this year as a newcomer to scooter racing.

I know there is some inevitable sibling rivalry between Bert and his establshed scooter racing brother Steve, but they certainly push each other along very hard, and I would say have probably pushed each others skills on greatly in 2008. They raced each other very hard on the Saturday practice at Anglesey earlier this year, and I know I was pretty impressed when they both flew by me in the wet with their knees on the tarmac! Despite the wet conditions, it was awesome to see such riding skill. I actually think that when Bert gets his new motor for 2009, he will be running Charlie Edmonds and Stuart Day pretty close for the 2009 Group 4 Championship. In fact........ I'd go as far as to say that with the right engine and reliability, Bert could win the champioship in his second year of competition! - No pressure though Bert ! :)

Theres a really big entry in both the bikes and scooters for Cadwell, with full grids all round! Its certainly going to be a full paddock I reckon! The down side of this is that due to the number of entries, we will be racing the full circuit both days. Normally we race the short Woodlands circuit on Saturday and the full circuit on Sunday. Naturally its great to have good entry levels - especially in the current economic climate - but on a personal basis it would have been great to race the Woodlands circuit. My bike is not big on power, so the shorter circuit levels things out a bit!

I've been struggling a bit to work out the best gearing to use at Cadwell. I guess my 2 races so far this year have just got me back on track.... not much more - I still have so much to (re)learn and data to build up on circuits and gearing, what works, what doesn't etc etc so its all a pretty steep learning curve. But as always a few regular riders have been a great help with help and advice.... thanks fellas..... much appreciated!

Anyways..... that will do me for now...... hopefully another blog before Cadwell..... transmission is currently apart whilst I make final decisions on gear ratios to use, so you never know - next entry might have a photo of a chain and some clutch plates !
Posted by Paul Green