Well....... it was going to be a full paddock, with the VMCC meeting having the biggest entry of the year, so I decided to travel the 45 miles to Cadwell on the Friday night and get a decent space in the paddock! If I left it till Saturday morning I had a feeling I'd be somewhere up the Louth Road!

I got there around 8.00 and after a couple of circuits of the paddock found Jigsy in his palatial motorhome with a decent space alongside him! He had the barbecue on and the beer opened.
>> Jigsy's rattler >> 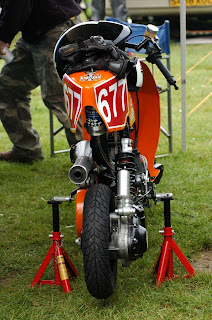 I set up the van, and finished up a couple of small jobs I still had to do on the scooter..... I'd picked up the temporary rev counter from KA sensors, and found a bracket suitable for it in the workshop, so I fitted that in readiness, and did a couple of other small tinkering jobs.... isn't there some kind of law that says you should start tinkering with your bike in the dark as soon as you get there?

I had a wander around, shared a couple of beers and some chat with the usual suspects before retiring to sleep on a luxurious blow up mattress in the van! A disturbed night when i couldn't switch the light off in the back at 3am...... opening and closing the doors obviously made me really popular with the neighbours at 3.am - sorry Dan!

Jigsy was all excited and woke me with a bang on the door at 7am.... the crazy dude. We awoke to fog.... lots of it! Parctice was called around teh usual time 9.30, but it was still real foggy. I was in the queue to go out next but the fog just came down again and even during the 15 minute practice session came down to the point where the marshalls posts were not visible, so that put an immediate halt to proceedings!

The fog just hung around will lunch time so we lost a good three hours! It was clear we were not going to get our races in that afternoon!

Eventually i got out to practice as a few friends started to arrive........ Bike felt great and I felt great myself on it - relaxed - and comfortable. My car has been in the garage for over 3 weeks ( long story - but its best to heed red warning lights! ) so i'd been riding my road scooter daily, which i am certain helps things along!

It was immediately apparent that the scooter was revving nicely, but I'd maybe not made the right gearing choice after all the deliberation! I was a bit too high I felt....... I was flying down the straights passing bikes, but didn't have enough power to pull up the hills at Cadwell, so I decided to change back to my original first gearing choice and made a mental note to follow gut instincts more!

So more friends and family arrive to find me with clutch and gears out. My benevolent sponsor (!) arrived to find the scooter on its side with its guts out! ha ha. My nephew also arrived around this time, and it made me chuckle that the environment was not was he is used to ( he's a Formula 1 mechanic!). 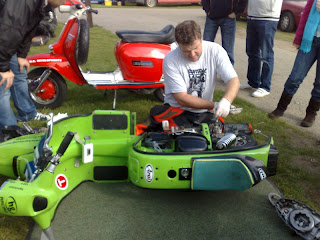 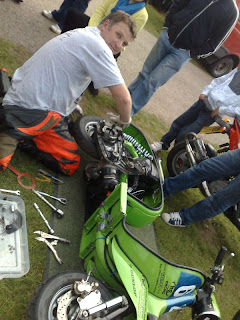 Anyways - gearing all sorted and its down for the first race. Got an ok start, but it was awesome to see and hear 38 scooters blasting off! I wasn't last - hurrah!

I had never ridden the full circuit at Cadwell before and struggled a little to find the right lines at the Mountain and Park Bends, where unfortunately I missed a gear...... Ooops...... clatter clatter ///...... fistful of revs ..... during which i seemed to select most of the gearbox at some point including any hint of false neutrals I could find! This would come back to haunt within a lap...... I could hear a slight change in the tone of the engine, and a vibration started to appear along the start straight and up the sweeping hill.... then a couple of misfires and on the exit of the Gooseneck down hill the motor just stopped! Game over! I tried to bump it back up, but nowt happened so my first non finish! Gutted!

I watched the show from behind the straw bails...... man those front runners are flippin quick.... and Tony O'Briens little Vespa is bloody amazing!

The long push up to the paddock about killed me -! I needed an iron lung at the top! Thanks for the pushers who appeared at the top to help!

We started to examine what may be wrong! All wires in place present and correct..... hhmmmm...... process of elimination...... so plug out - no spark! Put a new plug in ...... a spark! result me thinks! Bumped it up and it started straight away...... and ran for a whole 1o seconds before stopping again..... hmmmmm..... stator? coil ?? We took flywheel off,,, checked the stator - all appeared well, although there was a mark where the ignition pick up had rubbed on the flywheel. JB Tuning had a spare coil so that was tried and it was running fine again! I ran it up and down the paddock slowly ( mistake) and let it run for a couple of minutes.... al seemed well! Conclusion drawn was that it must have been the coil!. 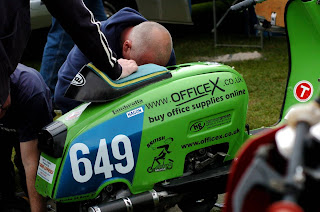 Saturday night I ran the SRP boys into Horncastle and we fetched ourselves a chinky chinese which was very welcome! Between us I managed to cause a little upset by driving off to turn around not knowing there were a couple of bottles of beer standing up in the back which promptly fell over and smashed - oops beer in my sleeping quarters! Also a black bollard jumped out at me too and hit the side door! Double whammy!

A few drink in the clubhouse then midnight burgers at the Hardy encampment (always a pleasure) then back to bed and a really good nights sleep!

Sunday will be a whole new day!
Posted by Paul Green