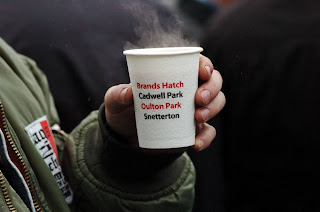 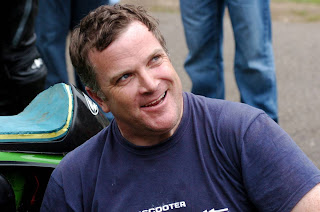 Well........ Sunday dawned damply........ I opened the doors of the luxury executive accomodation (the van!) to see clouds and definite feel of rain in the air.... which to be honest I was kind of looking forward to as historically I've always gone well in the wet.

Most of my local club - Grantham Daytrippers were coming over - Miles was riding with them on his Dragster and had been looking forward to the ride.

Anyway, I had this nagging doubt after yesterdays escapades with the first non finish of my second time around race career, so I decided to bump the scooter up and check everything was ok again. It started up straight away fine, so I ran it around a while in the paddock, then decided to give it a few more revs up the entrance road....... pop ....bang .... misfire..... then stop....... oh dear...... so it wasn't the coil after all then!

So as most of my local club and friends arrive it was off with the ignition..... this time the ignition pickup has most definitely clouted the flywheel, and it has actually knocked the head round out of line! 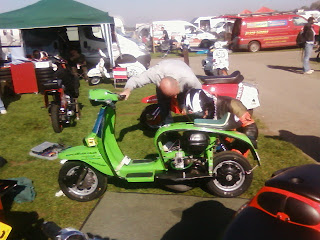 Much scratching of heads and the general conclusion points to a twisted crank (?).  I felt gutted.... there I was , my local circuit, 25 friends and family there, and I'm not even running!

Ralph Remnant, amongst others, comes over and offers his spare Motoplat ignition - which has a far greater clearance.  So we proceed to take the old one off and Ralph brings his ignition over and kindly fits it, whilst I'm running around finding earth leads, and bracket for the coil. 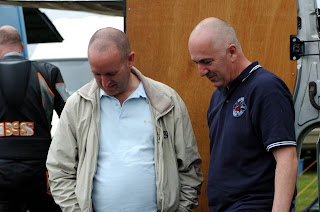 Biz and Mick formulate a plan to cut plastic!

Jigsy next to me is a hero as he offers his spare plastic cooling fan.... cheers mate! Biz and Mick from Datrippers SC are set on with Tony O'Brien's soldering iron trimming down the fins and centre of the fan to fit onto the Motoplat.  Scotty provided a decent earth strap whilst several interested parties sneaked a look at what was going on!

Bizarrely, Chalky White who tuned and built my motor also introduced himself along with the guy who made the ignition setup - he recognised it as he was walking by! 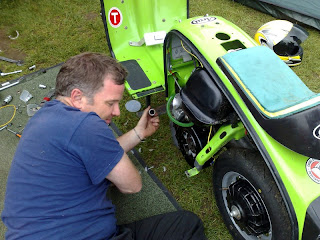 What - no spark plug? We won't say anything about trying to start it without fitting one!

Once the Motoplat was all fitted there was only a few minutes to the start of race 1, so we were rushing to make sure it ran ok..... it wouldn't start!  Ralph told us we'd need loads of engine revs in first gear as the Motoplat needed revolutions to generate a decent spark.  Still no luck and we were feeling knackered pushing the damn thing!  So in steps Ralph and Chris Geyton who started it up on the SRP rollers.... what a great gadget that is!  Mental note to add to shopping list! 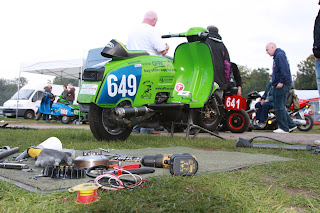 It ran fine and revved cleanly - result!  A little vibration... but sounded and felt fine!  Game On!

Race 1 - relieved to be running, I'd pre-warned friends that motor had problems so don't necessarily expect a finish!  Got a great initial start off the line, but then a vibration kicked in and I backed off before going for it again, with a second wind I took a wide line to the right up the first hill and managed to pick up a couple of places, setting my sights on Jigsy, who I slipstreamed down the main straight, but the extra grunt of his Group 6 bike was too much.  I was a little reluctant to go totally flat out - I was a little reluctant to use full power as I had visions of wrecking Ralphs Motoplat.  I made a right hash of the left hander before the Mountain on both the first laps - right in front of my friends!  But managed to get it right after I decided it would be very embarrassing to run off the track there! 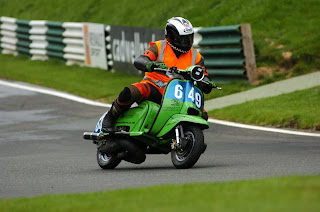 
As the race went on I started to feel more confident and was riding around the problems, lapping around 6 seconds quicker than the day previous.

Just about everyone was on wet tyres as it had been quite damp through the Woodlands section, but as we were on the track a dry line quickly formed, and as it turned out I reckon everyone would have been fine on dry tyres.

Race 2 - Decided to just try and go for it..... but had a less than desirable start and got bogged down, tried to go for the same wide line, but came across Tom Oliver and a Group 6 bike sliding down the track.... people running off the tarmac to avoid the carnage...... but it put me close to Jigsy exiting Charlies and along Park Straight I used full throttle which I'd been reluctant to do in the first race, I was reeling him in and almost alongside him into Park bend, which we both managed to make a little bit of a mess of!  We stayed close the whole of the first lap till we got back to the start straight where he got a better drive and pulled away a little, then came drunkmonkey the little bugger........ still, at least I was being passed by Group 6 bikes! 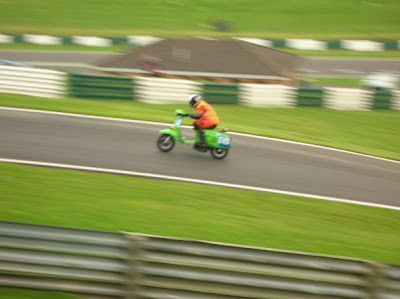 Lap 4 and all of a sudden the Coventry new boy on Bert Conneeely's old engine came by me as I started to sit in a comfort zone.  This gave me a wake up call and I went the fastest I'd ever gone through the Gooseneck - conquering a demon there - and dived up the inside into Mansfield being pretty late on the brakes.

I then pulled away and across the line had pulled a gap.  I got a big cheer from friends as I pulled off the track.... cheers guys!

Phew...... above all I was happy to have finshed both races, wasn't last and wasn't lapped again!

We hung around in the vain hope of getting our third race, but it was not to be.

Overall there were lots of positives to take from my third days racing, I had felt comfortable on the scooter - no doubt in part due to riding my road scooter daily for the previous three weeks (car troubles!)

I felt I'd made a small but significant step in feeling more comfortable and a little quicker.

As for the state of the engine...... well the initial assessment of twisted crank proved to be incorrect! The crank was checked by Chalky White at Replay scooters - It was only two thou out!  Refitting the crank and starting the bike with a new ignition pick up revealed that there was still a problem though as the new pickup head was also smashed as soon as the engine was given any decent revs!

After cadwell I really wanted to do this race in France that a few of the guys were going to...... so the next week and a half was spent messing around with crank and ignition, till eventually I gave it up and contacted Ralph with a plea for the Motoplat to be sent over to France with Paul Baker....... and very big crossed fingers!

Thanks to Chalky for prompt checking of the crank and ignition....


So...... Friday 10th of October saw me loading the scooter into the van with no ignition setting off on the 450 mile journey to Joigny in France - with a little bit of wing and prayer feeling!